Good and bad news for the project! First the really good news, which is that the Andrew W. Mellon Foundation has approved funding for year 2 of the project (the project is funded on a yearly basis). Also good news, is that we have now completed the rather complex task of scanning all of the 1200 letters to and from Wallace which the NHM has in its collection. We would like to say a big thank-you to Steve Cafferty (NHM),
who generously allowed us to use the HerbScan machines he purchased for the NHM's part of the Mellon-funded Plant Initiatives project (see http://plants.jstor.org). These were used to scan nearly all of these letters.

The not so good news is that our project's Archivist, Dr Anna Mayer, has sadly had to leave the project. Anna's last official day was June 7th and she will be missed by us and by staff in the NHM's Library, where she worked. We wish Anna the very best of luck with her future career and thank her for all her hard work in helping to lay the foundations of the project.

Anna's departure means that the position of project Archivist will be re-advertised in the near future - watch this space! Because of the way in which the project is funded the position will initially be for 16 months, with the expectation of an additional 12 months of funding after that. The main work of the Archivist will be to obtain copies of Wallace correspondence from repositories around the World, catalogue the letters using the project's database, and finally to read the letters (not always easy!) and write summaries of them. 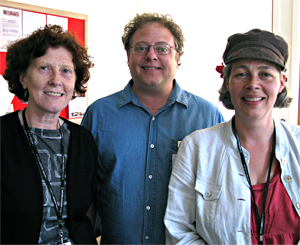 The WCP team in May 2011. From left to right: Judith Magee,
George Beccaloni, Anna Mayer