Records in the our MS Access database are of two basic types: parent and child. There are two kinds of parent records:

1) LETTER: A letter, postcard, telegram etc., plus (where appropriate) an envelope and any enclosures.

2) MANUSCRIPT/OTHER: Other documents such as notebooks, and items such as sketches.

Each parent record has a unique permanent cataloguing number, which is prefixed by the letters “WCP” (e.g., “WCP23”). Parent records hold information about the letter e.g., the names of the sender and intended recipient, their addresses, the date the letter was written, and a summary of the letter’s content.

Each parent record has one or more child records attached to it – one for the manuscript letter, postcard, telegram etc, others for the envelope and enclosures (if any), and others for documents related to the letter such as author's drafts of the letter, old handwritten/typewritten transcriptions of it, and published versions of the letter.

Each child record has a unique permanent reference number in addition to the WCP number of its parent e.g., an enclosure to letter WCP987 may have the item number "52" and its complete WCP cataloguing number would therefore be "WCP987.52".

The four child record types are as follows:

Letter: Holds information about a letter, postcard, telegram etc, e.g., the repository, the type of document (e.g., postcard, telegram), the condition of the document etc. There may be more than one Letter child record, e.g., if there is a record for a manuscript letter, an author's draft of it, or a old handwritten transcript of it.

Envelope: Information about the posted envelope, including details of the repository. There is only ever a single envelope record for any parent record.

Enclosure: Information about an enclosure, including the repository. Enclosures can consist of a wide range of items, including letters by or to people other than Wallace, photographs, newspaper cuttings etc. There may be several enclosure records attached to one parent record.

Publication: Records information about any published versions of a letter. A letter may have been published several times, so there may be several of these records. 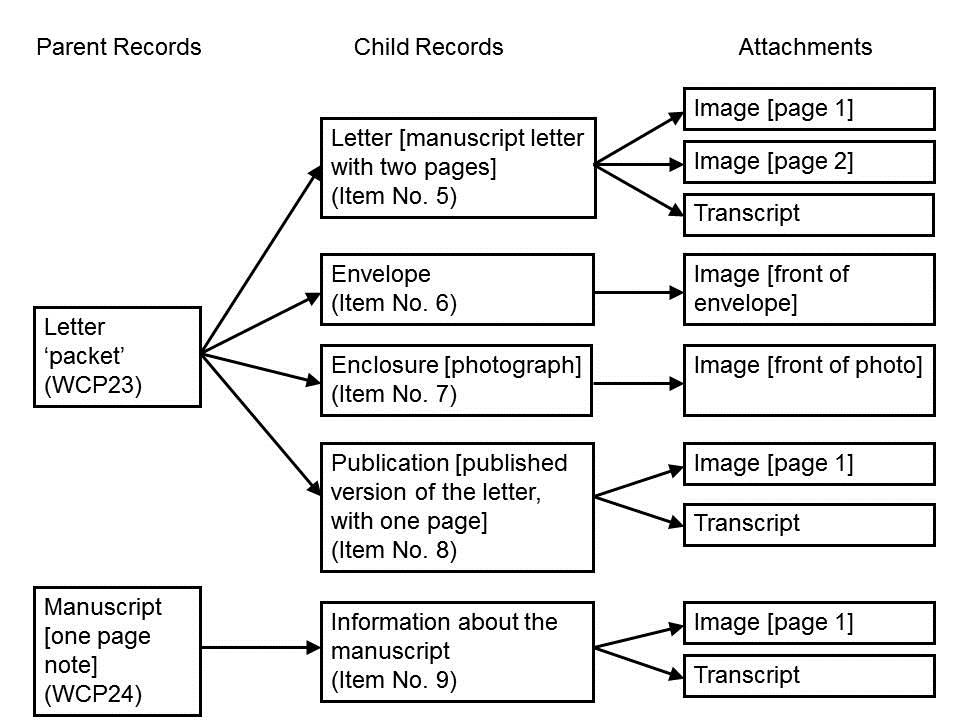 Example relationships between parent and child records and various attachments for the two types of parent record in the project's database.

Structuring the information in the way described above means that everything which relates to a particular letter is united under one parent record. This enables us to 'reconstruct' letters - uniting enclosures and envelopes with the letter manuscripts - even in cases where these documents are now in different repositories. Manuscript and published versions of letters are also united for the first time, allowing comparisons between them to be easily made.

For more information about the documents we catalogue and the metadata we capture please see https://www.wallaceletters.myspecies.info/content/epsilon