This letter (WCP367) was sent from Ternate, when Wallace was 4 years into his 'Eastern journey ' exploring the Malay Archipelago. I selected this letter not just for its content, fascinating though it is, but for the story behind it and the fact that this innocent letter has caused quite a stir, albeit unintentionally.

Wallace travelled to the Malay Archipelago (Singapore, Malaysia and Indonesia) in March 1854, eighteen months after returning from his Amazon expedition. He spent eight years exploring the islands, travelling a total of 14,000 miles and undertaking 60-70 separate journeys. In this time he amassed a huge, diverse and important collection of insects, birds, mammals and reptiles – around 25,000 specimens in total, with well over a thousand of these new to science.

The scientific observations Wallace made on these islands contributed to some of his most important work. The two volume book The Malay Archipelago published in 1869 was written about his eight years there, and was so successful that it hasn’t been out of print since its publication.

The letter in question is one from Wallace to Frederick Bates, brother of Henry Walter who was Wallace’s Amazon companion. It was written from Ternate, on 2nd March 1858 and discusses insect collecting, insect coloration and other musings on the richness of the archipelago.

Frederick, like his brother Henry, collected insects and had written to Wallace previously about the sorts of things he had been collecting, in particular exotic insects. Wallace shared details in the letter about the sorts of species he had been collecting and where they had been found. He mentioned to Bates that his second Macassar collection should reach England soon and he believed it contained "the most remarkable lot of Carabidae ever collected in the tropics in so short a time". He gives a vivid account of what life as a collector in the tropics sometimes amounted to, spending "hours daily on my knees in wet sand & rotten leaves".

The letter has an extremely rich entomological content, discussing species found in different localities and the research he has been conducting which will contribute to scholarly work upon his return. Musing on the richness of the archipelago, Wallace writes:

"I could spend 20 years here were life long enough, but feel I cannot stand it away from home & books & collections & comforts, more than four or five, & then I shall have work to do for the rest of my life. What would be the use of accumulating materials which one could not have time to work up?"

Luckily for us, he heeded his own words of wisdom, returning in 1862 to write and publish much on the region.

The link in the letter to the story behind it comes as he writes, "I have lately worked out a theory which accounts for them naturally". This sentence is a reference to the now famous essay he wrote whilst recovering from a fever in February 1858. The essay in question was on the theory of evolution by natural selection, which he sent together with an accompanying letter to Charles Darwin shortly after penning it, asking Darwin to forward it on to Sir Charles Lyell.

Darwin received the letter and essay on 18th June, writing to Lyell the same day asking what he should do with Wallace’s work. Knowing that Darwin had deivsed a similar theory Lyell and Joseph Hooker thought the fairest thing to do would be to read the two men’s work at a meeting of the Linnean Society. This was duly done on 1st July 1858, leading to the publication of "On the Tendency of Species to form Varieties; and on the Perpetuation of Varieties and Species by Natural Means of Selection" – thus uniting the two great scientists as co-discoverers of this ground-breaking theory.

Whether or not it was fair for the essay to be read publically without Wallace’s knowledge is a whole other blog entirely – the controversy this blog is concerned with is the date on which Darwin received Wallace's essay, 18th June 1858, and the discovery of the letter to Frederick Bates in the later decades of the twentieth century which was received by Bates on 3rd June 1858.

The discovery of the Bates letter confuses matters because it quite clearly has 3 postage marks on it, indicating it began its journey aboard the steamer that left Ternate on 9th March 1858. There is a mark indicating its arrival in Singapore on 21st April 1858 and then London on 3rd June, and a final mark showing that it arrived at its destination, Leicester, the same day 3rd June.

Therefore if Wallace’s letter and essay to Darwin had been sent on the March steamer they would have reached Down House also on 3rd June or thereabouts (one would assume, especially as Down House is much closer to Southampton than Leicester). Therefore, conspiracy theorists have delighted in theorising that Darwin received the essay on 3rd June but said nothing about it to anyone until the 18th, which is when he wrote to Charles Lyell saying he had received it. This would have given him time to read over Wallace’s work and use it to amend his own. 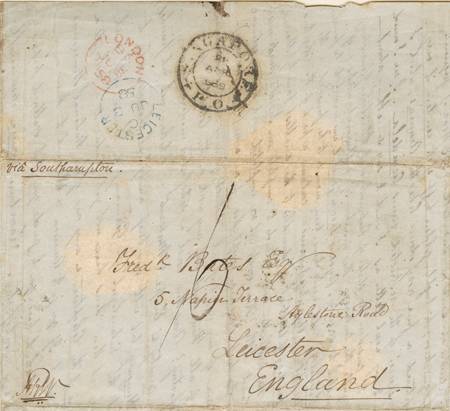 Page 4 of the letter to Bates, clearly showing the three postage marks of Singapore, London and Leicester
© Natural History Museum

As unlikely as this seems, it has actually spurred four authors to write about it; McKinney (1972), Brackman (1980), Brooks (1984), and Davies (2008) and many more have questioned what really went on - did Darwin receive the letter two weeks before he said he did? Did he use Wallace’s essay to shape his own work?

Of course, this theorising wouldn’t even need to happen if we still had the letter Wallace sent to Darwin as it would no doubt have similar postage stamps to the Bates letter, charting the journey to its destination. However, we still don’t know where the letter is, or if it even survives.

Late in 2011, Dr. John van Wyhe and Kees Rookmaaker sought to re-investigate this thorny issue in an article they published in the Biological Journal of the Linnean Society "A new theory to explain the receipt of Wallace’ Ternate essay by Darwin in 1858" (2012, 105, pp. 249-252). They put forth an argument that in fact, the letter to Darwin was sent on the April steamer, not March. This is supported by evidence that Wallace’s letter (which he sent the essay) was a reply to Darwin’s letter of 22nd December 1857 (this is actually one of the few things known about the missing letter).

Davies (2008) undertook some detective work which indicated Wallace would have received this December letter from Darwin in March 1858, on the same steamer that he would have sent the letter to Bates on. As the steamer would not have stayed long at Ternate, there would  therefore be no way Wallace could  have written a reply and send it off to England on the 9th March steamer. Wallace’s later recollections of sending this letter to Darwin don’t allude to the month he sent it either, just that it was sent to him via the "next post".

Dr. van Wyhe and Rookmaaker chart the journey of the letter and essay via the various stops it would have made in its way back to England, finally reaching Southampton on 16th June 1858 at nine o’clock in the evening, travelling to London early on the 17th and finally reaching Down House on the 18th June.

So, this seemingly innocuous letter to Bates ended up causing quite a stir and I’m sure Wallace would have been quite amused at all the fuss! Conspiracy theories will always abound and there will always be people who prefer Darwin to Wallace and vice versa, but really if you strip all that away, what you have are two remarkable men, independently co-discovering a theory that was forever to change the way we see the world.

You can explore Wallace and Darwin’s relationship through their letters here.