Shortly after Wallace death in November 1913, his three close friends, James Marchant, Raphael Meldola and Edward Bagnall Poulton set up the Wallace Memorial Fund, also known as the Memorial Committee. The fund’s purpose was to create a memorial for Wallace, in the form of a medallion featuring Wallace for Westminster Abbey; a portrait of him and a statue of him for the Natural History Museum.

As it turned out only the medallion and the portrait were created, with the memorial unveiled at the Abbey on 1 November 1915 and the painting by J. W. Beaufort presented to the Museum on the 100th anniversary of his birth in January 1923.

Marchant, Meldola and Poulton set about raising awareness of the Fund and raising money in the months following November 1913. In a letter (WCP4641) written to Poulton on 23 February 1914, Meldola (the Fund’s Treasurer) informs Poulton

“The Fund is now £236 & Marchant wants to issue order for Medallion”.

Westminster Abbey was delighted to accept the medallion and nine months after this letter was written, it was unveiled.

Well-known names from the scientific world contributed to the fund, including Archibald Geikie, E. Ray Lankester and David Prain as well as contributors from the world of spiritualism and long-term correspondents of Wallace’s – Oliver Lodge and William Crookes.

However, a letter (WCP4249) from William Greenell Wallace in January 1914 to TDA Cockerell, who was a close friend of Wallace’s, revealed the difficulties the Fund was having in realising their ambitious programme;

“I am sorry to say that the memorial fund is progressing very slowly and I doubt it will be possible to do more than the Abbey medallion, and even that will cost £300. The Abbey fee, for permission only, is £200 and the sculptor’s fee, greatly reduced in this case, is £100. It seems that fame without money has not much chance of recognition in this democratic country.”

“There is no fear that the statue will [be] disappointing as there is no chance of it being done, at present.”

Violet Wallace, in a letter (WCP4923) to Octavius Pickard-Cambridge written on 5 December 1913 talked about the possible statue, writing,

“I like the idea of a statue if it could be like the one of Darwin in the N. H. Museum – that one always looks so natural, and my father would look nice.”

Sadly, the Fund didn’t raise enough money to achieve all of their aims, with the statue not being realised. However, exactly 100 years after his death on 7th November 2013 a statue of Wallace was at last unveiled at the Museum by Sir David Attenborough.

It was donated to the Museum by the 'new' Wallace Memorial Fund, which raised the money for it and comissioned sculptor Anthony Smith to sculpt it. It shows Wallace as he would have looked during his exploring days as a young naturalist in the field. It is also perhaps fitting, that the statue is positioned outside the Darwin Centre, where the bulk of Wallace’s specimens that he collected during his years in the field are now housed. More information and photos of the statue and be found HERE. 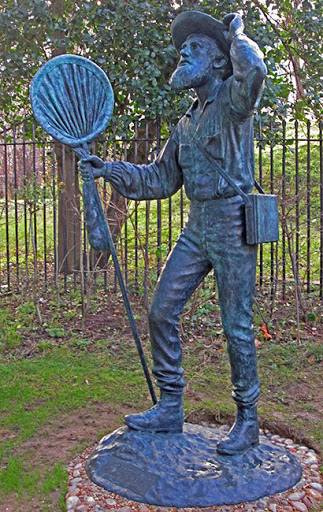