This letter, or rather, note, is short and succinct. It was written by Wallace’s son William Greenell Wallace announcing his father’s death, and is dated 7 November 1913 - the very day Wallace passed away.

He has not left his bed since Monday night. 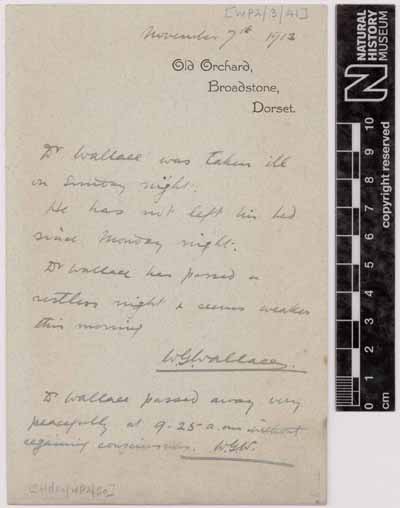 Wallace led a long and successful life, living to be 90 years of age, with only minor health problems later in life. The plethora of obituaries that were written following his death are testament to what an extraordinary life he led. I’ll leave you with a few quotes from a few different ones published in the weeks after his death.

"A life so long, so active, and so varied, cannot be dealt with in a small compass. Simple and unostentatious, he was a great man in the truest sense of the word." (British Medical Journal, 15th November 1913)

"He was one of the greatest and clearest thinkers of his age . . . of one thing I am certain, and that is that never has anybody come more fully within my favourite description of a great man, namely, that 'he is a combination of the head of a man and the heart of a boy.'" (The Daily Citizen, 8th November 1913)

"By the death of Alfred Russel Wallace this country loses not only a great scientist, but the last of the men who made the early part of the Victorian era so memorable." (Daily News & Leader, 8th November 1913)

"The last link with the great evolutionary writers of the mid-nineteenth century--the men who transformed the thought of the world--is broken. How can I best speak of the long, happy, hard-working, many-sided life that has just come to a close?" (Nature, 20 November 1913)

"It is impossible for any man to discuss adequately the life work of Alfred Russel Wallace. His activities covered such a long period, and were so varied, that no one living is in a position to critically appreciate more than a part of them . . . All must agree that a great and significant career has just been closed, but its full measure will probably never be known to any single man." (Science, 1913 December 1913)