This letter (WCP3710) was written on 26 June 1898 to Michael Flürscheim (1844-1912), a German economist who worked on economic and social reforms that focused on the single tax, land nationalisation and an improved currency. This letter highlights Wallace’s involvement in socialism; an area he became very involved in later in his life.

The short letter begins with Wallace expressing regret that Flürscheim has moved to New Zealand and also that he has, as Wallace writes

“given up working primarily for land and social reform & are devoting yourself mainly to the Currency question.”

Wallace disagreed with Flürscheim on this matter and believed it wouldn’t “abolish the unemployed, or enable every man to get the whole produce of his labour.”

Flürscheim believed currency reform was needed to complement single tax and land reform to cure the ills of society. There were two types of currency reform at the turn of the twentieth century; one where the state would manufacture more money to put into circulation believing this would spur the economy on and the other, which Flürscheim advocated, wanted to replace the currency that was based on gold and silver with something such as a ‘labour note’ - where people could trade in hours of labour.

Wallace hoped “we shall soon have you back here working for land reform and the extension of cooperative industry” - two causes Wallace felt very strongly about.

Although becoming more active on social matters later on in his life, Wallace first encountered socialist ideas as a young man, being greatly influenced by the writings of Robert Owen (1771-1858). He attended lectures with his brother John when he moved to London at the Hall of Science in Tottenham Court Road.

Wallace became President in 1881 of the newly formed Land Nationalisation Society – a society that believed land should be the property of the state to ensure everyone could be free to use and enjoy it equally. He remained its President for 30 years and, as well as calling for public ownership of land, he also advocated the land colony as a solution for unemployment, a pure paper money system (Fiat Money), he supported women’s suffrage and wrote on the dangers and wastefulness of militarism.

At the July 1892 meeting of the Land Nationalisation Society, Wallace spoke in his Presidential Address to Herbert Spencer’s newly released book, Justice. Wallace explains that his first encounter with Spencer’s work was reading Social Statics in 1853. He says that through this work he learnt, in Spencer’s words, that “to deprive others of their rights to the use of the earth is to commit a crime inferior only in wickedness to the crime of taking away their lives or their personal liberties”. 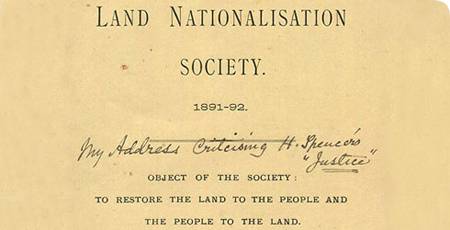 Wallace ended the letter to Flürscheim by informing him he had recently attended a Congress of Spiritualists in London, where he “tried to induce Spiritualists to take up the social problems” - a quote I love, as he seemed to be a man who was never one to pass up an opportunity to recruit more people to the socialist cause!

We have many letters written by Wallace in EPSILON that discuss and advocate socialism and if you are keen to explore more letters written to Flürscheim, we have 12 of them that you can read here.