This letter was written to Alfred Newton, who was the first Professor of Zoology and Comparative Anatomy at Cambridge University, elected to the post in 1866 and one he retained until his death in 1907. Wallace and Newton corresponded extensively upon Wallace’s return to England from the Malay Archipelago on a variety of scientific and personal subjects and our online archive features a total of 87 letters written between the two men.

However, one particular letter (WCP4006) dated 19th February 1865 that Wallace wrote to Newton caught my eye; it was about more than science, revealing a recent heartbreak he had suffered. He writes to Newton:

“The fact is however I have done nothing for the last six months, -- having met with that "tide" Shakespear[sic] speaks of, which I had thought to have taken at the flood & been carried on, not to fortune but to happiness, -- when a wave came & left me high & dry, -- & here I am like a fish out of water.

To descend from metaphor I have been considerably cut up. I was to have been married in December, -- everything appeared serene, -- invitations were sent out, wedding dresses ordered & all the programme settled, when almost at the last moment without the slightest warning the whole affair was broken off.”

The lady in question was Marion Leslie, daughter of Wallace’s chess-playing friend Lewis Leslie. Peter Raby, in his excellent biography of Wallace theorises some possible reasons for the literal jilt at the altar, citing Wallace’s unsteady income, lack of investments and possibly some of his more ‘unorthdox’ views may have reached the family.

Wallace also speaks of his heartbreak to Darwin in January 1865, writing “you may imagine how this has upset me when I tell you that I never in my life before had met with a woman I could love, & in this case I firmly believe I was most truly loved in return.

Scarcely any of my acquaintances know of this, but though we have met so little yet I look upon you as a friend, & as such hope you will pardon my boring you with my private affairs.”

Wallace despairs in another letter to Darwin in October 1865 that he is struggling to complete his work and believes having a wife would greatly assist him with his work although he believes it “not likely” to happen. At this point, you have to really feel for Wallace, jilted at the altar and believing himself to remain a bachelor from there on in. It’s also nice to see first-hand that Wallace felt Darwin and Newton were close enough confidantes and friends that he could share such delicate affairs of the heart with them.

All was not lost, thankfully! To give the story the happy ending it deserves, he met his future wife Annie Mitten, daughter of William Mitten, an authority on bryophytes, when he visited Mitten’s home in Treeps with his friend Richard Spruce. Alfred and Annie were married on 5th April 1866 and their first son Herbert was born in June the following year, with Violet and William following in 1869 and 1871. They remained happily married for the rest of his life. 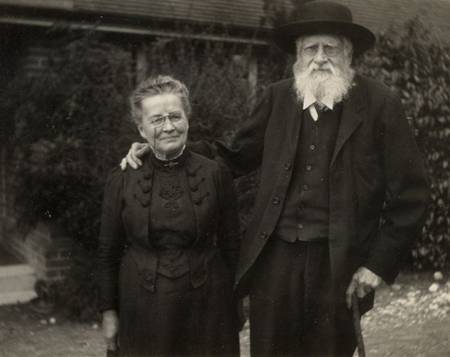 Call me a hopeless romantic but this letter really piqued my interest. When we think back to the great scientific minds of the nineteenth century, we often define them by their theories and the great scientific work they produced (and also conjure up an image of them which is invariably them in old age, bearded and be-spectacled) and forget they were just like you and me (albeit a touch more intelligent!) and I find it immensely interesting to uncover the more personal side of the scientist, the character and personality behind the science. This is just one of many reasons why EPSILON is such a useful resource, as it can finally give unbiased insights into Wallace’s private life, from the man himself!